I’ll always remember the Christmas we received our Nintendo 64.

There was a huge pile of presents on the couch next to the Christmas tree. I distinctly remember most of them being wrapped in red paper, but it was so long ago I can’t be sure. Anyway, we began pulling presents off the top, doling them out to everyone like we always did. Then, we moved one present and underneath a face was peering up at us. It was a cartoon face, with big blue eyes, a brown mustache, and a red plumbers hat. It was Mario.

Now, I’m pretty sure I remember what you said next:

We started throwing presents left and right until we finally unveiled the prize underneath: a brand new Nintendo 64. It included a copy of Mario 64, which I remember playing with you while we gorged on the cheddar popcorn from one of those oversized holiday tins. You were struggling with that penguin race in the arctic level. It was a Christmas to remember!

Unfortunately, I don’t remember when Legend of Zelda: Ocarina of Time arrived in our house and I so wish I did. That was a moment that would define the rest of my life.

The Legend of Zelda franchise shaped my childhood. I spent so much of my youth drawing fanart and trying out new games. I specifically fell in love with Majora’s Mask while I was in elementary school. My friend Shelby and I rented it from Hollywood Video and played it in her garage. It was so fun.

Sometimes I wish I had the power to step back and look at my life from start to finish. I want to step back and appreciate all the moments in my life that, at the time, seemed small, but in reality set me on a completely different course. I remember when we got the Nintendo 64, but I can’t remember the day Shelby and I walked up to Hollywood Video and it makes me a little sad.

In a previous post I mentioned that you were the one who got me into Harry Potter. I don’t remember when you brought the book to me, I just remember we were living in Vancouver and you said I should read Chamber of Secrets because I liked horror stories. Your decision to do that is the reason I’m married to Michael and, at the time, I had no idea that such a little thing was going to make such a big difference.

I vaguely remember the day my professor approached me in my college journalism class and said she wanted to put my name up for an internship with the communications department. If I hadn’t gone for it, I wouldn’t be working where I am today. That internship got me this position. What if I had decided not to go for it? What if I had decided to pursue one of the many other internship opportunities there were? Where would I be now?

Thinking about these little moments also makes me think about the decisions I’ve been making recently and I guess I would say it’s making me appreciate the present more. I want to remember the little things so that when I’m older and in a completely different place, I can remember what put me on this path.

I liked the show Stranger Things.

If you’re out of the loop, Stranger Things is a Netflix series about a small town right outside a secret government base. Something happens and people start to go missing and it’s up to the town’s residents to figure out what’s going on and save a little boy named Will.

Anyway, I really loved this show. It’s a wonderful blend of three very common horror narratives: children coming of age and fighting monsters, like in Stephen King’s It or the movie Super 8; high school hallway horror, like in any 80s slasher film; and adults fighting human monsters and government corruption, like Cabin in the Woods. Stranger Things combines all of these plots to create one cohesive, highly addictive story that had me hooked as soon as I started watching it.

Now, earlier this week you brought up the show and said that you HATED it. The first three episodes were so boring you got up to do laundry while you watched. You also hated the characterization, which to be honest was one of the reasons I liked it. Anyway, my response to this was asking how far you got. You said three episodes and I said “oh, it picks up after that. You just have to push through.”

Where in the world did this logic come from? Why in the world do we force ourselves through boredom or painfully bad acting in hopes that it gets better? That’s what I’ve been thinking a lot about since we talked about Stranger Things, Daniel. The conclusion I’ve come to is that it all depends on who told you to.

So looking back at my own life I’ve on multiple occasions pushed my way through something boring because someone I trusted told me it would get better. The best example I have is Parks and Rec, a show which I can say without any sarcasm actually changed my life. However, before you get to the wonderful, positive, hilarious bits of that show you have to sit through the first season, which oh my god. I could get through maybe an episode a day and that was it.

It took me maybe two weeks to get through the first season. I got through the next six seasons in maybe a month, that’s how much it picked up.

If I had just given up when it got boring I would never have experienced the positivity and beauty of that show. Why did I not give up? Because my friend Meredith told me not to, and I believed her. If anyone else had told me to keep going, I might not have, but I respected Meredith’s opinion.

Me reading about the Dursleys in the first chapter.

Another example is Harry Potter. Now, I don’t know if you remember this, Daniel, but I didn’t read Harry Potter and the Sorcerer’s Stone first. I tried, but the first few chapters were SO BORING. I just couldn’t get through it. Then, my wonderful older brother gave me Harry Potter and the Chamber of Secrets. He told me “it’s kinda like a scary story and you like scary stories.” I gave it a try and WOW. I had been missing out!

How do you feel Daniel knowing it was you who got me into Harry Potter? If you hadn’t done that, I literally might not be married right now. Let that sink in.

On the other hand, there have been plenty of instances where I heard that I had to stick with something and it would eventually get good and it never did. 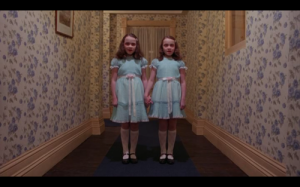 Wanna know something? These twins,  the most iconic twins in all of movie history, WEREN’T IN THE BOOK. OH MY GOD.

The movie version of The Shining for instance. Stanley Kubrick ruined The Shining. He completely destroyed my favorite characters and stripped out all of the amazing characterization in order to prop up Jack Nicholson’s acting skills. I could go on, but I could write an entire spoiler filled post about how much I hate that movie.

The John Carter of Mars series was another. I read the first one. It was okay, but I kept hearing from people “oh, you have to read the rest! They’re amazing!” Actually, no they’re not. They’re surprisingly racist is what they are! I almost couldn’t finish them because I felt SUPER UNCOMFORTABLE.

When I think back to these two instances though, you know what the difference is? No one I trusted told me to give them a try, it was society that insisted these things were good. Everyone loves Kubrick so much so The Shining had to be a good movie! Wrong. Everyone adored John Carter of Mars so the sequels had to be awesome. Uh, no.

The point I’m trying to get to is that sometimes there are things that you have to “suffer through” to get to the good parts, but you shouldn’t use that logic for everything. Listen to the people who know you and follow your own interests rather than those of the masses. It will save you a lot of boredom.

Well, before I end this post I’ll just say, after some consideration, don’t bother trying to finish Stranger Things, Daniel. It tapped into my love of horror, which I know you don’t share so don’t put yourself through it. I will just be alone in my adoration of this show.