A significant problem with anything that translates from written form to a video type format is that it can’t possibly be right for everyone.  Period.

While I mostly hear about how lots of people aren’t excited about these sorts of things, I’m not going to say I’m alone.  I’m sure there are lots of people who are mad pumped about Suicide Squad and Batman v. Superman.

When I hear someone saying they don’t like the character, usually it sounds to me like the director or writer interpreted their character in a way they didn’t.  They nitpick it, like their interpretation is the only relevant and correct one. 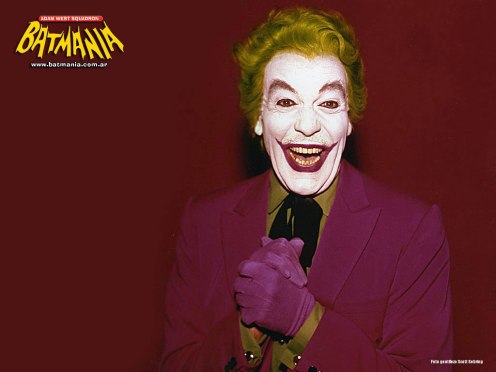 The original Batman series was written and directed in a manner that was very tongue in cheek.  I don’t need to support it that much; you’ve all seen gifs and clips of the show.  It was delightfully lighthearted and played to the playful side of comics.  I’m not going to lie, I haven’t seen this show a ton and I definitely haven’t read many comics from that era, but it seems very clear to me that the director, the actor, and the writer all knew what kind of Joker they were playing.  It says Batmania for fuck sake in that picture.

Jack Nicholson’s Joker was a more threatening, more charming, and more dangerous Joker.  He had the jokes, he had the character, and he had the giant gun.  He was a much closer portrayal to the comic book Joker at the time.  In fact, he was probably drawing inspiration from The Killing Joke.  It was the famous comic in which Barbara Gordon is shot and paralyzed.  Jack knew that he had to be the clown, but he know that he also needed to be terrifying.

Heath Ledger revitalized this character with such gusto that I would credit him and his performance to the string on comic book gritty reboot movies we have.  We were all blown away.  More than being goofy, more than getting us to laugh, he had genuine terror behind his role.  He was the other side of the dark mirror, looking at Batman and making him shiver.  Ledger and Nolan wanted to do away with some of the tricks and gimmicks behind the Joker and instead focus on his intensity and his insanity. 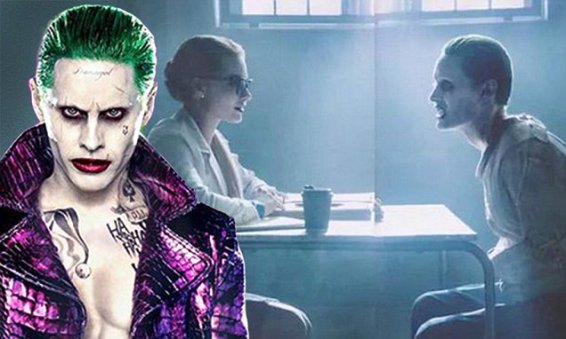 I ain’t got shit to say about Jared Leto because the movie isn’t out yet.  When I saw the trailer I was fucking pumped!  His laugh was amazing.  His voice was rough and smooth all at once.  The intensity and insanity behind those eyes felt genuine!  I’m super pumped.

For Batman comic book nerds here, my main reading focus has been The New 52 on (2011 and forward). I read the classics like Jeph Loeb/Tim Sale, Frank Miller, and Grant Morrison.  I’m actually attempting to read backward with the comics.  I’m slowly collecting volumes that connect backwards so I can read more from different writers.

The point I’m making is that the Joker I’ve come to understand and love was written by Scott Snyder.  His Joker portrayal has been one of intensity, dedication, and atmosphere.  When he shows up in the comics the entire Bat-Family is alerted.  He is no joke.  The Joker always has a plan and he will not falter from it, and its a race to figure out his game before he manages to fulfill his plans.  In the New 52 series the Joker is very fixated on isolating Batman so that their eternal game of Batman and Joker can go on uninterrupted.  He tells Batman’s sidekicks and old friends that they need to abandon him because they weaken Batman.  The Joker traps them in elaborate scenarios where they have to make impossible decisions.  He doesn’t want to kill them.  He wants them to push themselves away.  He wants a pure and focused Batman to combat his pure and focused insanity.  He’s always asking them if they “get the joke yet.”

Other people were familiar with other Jokers at the time.  I cannot say that I’m intimately familiar with the Joker’s from previous writers like Grant Morrison or Bob Kane/Bill Finger.  Jeph Loeb’s Joker had a vicious smile and almost perpetually had over the top plans.

But the Joker viewers read about is the one they wanted to see in those movies/shows.

When we read a character we develop our own portrayal in our minds, and when we read about that same character we simply place our own interpretation.  In comics, they shift writers frequently and we don’t blink.  Because we are able to just copy/paste our mental image of that Joker back in.  But there is no room to do this when you are watching a TV series or a movie.  The character is cut and defined, you cannot change how they are portrayed.

And this pisses people off.  I’m not saying you need to like or appreciate their portrayal but being pissed seems short sighted to me.  People envisioning things differently is an inherent part of …being human.

Here is why you shouldn’t be pissed.

But really, as a Joker he wasn’t accurate.  The Joker is about spectacle; he is about presence.  He has chemically altered skin and hair.  He wants to play a big game!  He’s not concerned with undoing the mob and besting the police.  His intensity and drive were there, but as Cracked has pointed out, he seems more concerned with anti-establishment than he does about furthering personal goals.

But we all fucking loved him anyway.  His portrayal was so cool, so scary, and so convincing.  He was nothing that we expected and we fucking loved it.  We had no idea before we saw the damn movie!

So how do people know that Jared is going to be bad?!